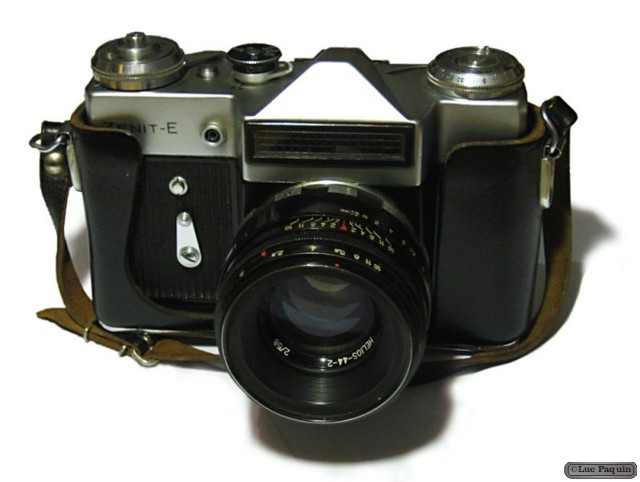 Zenit is a Russian camera brand manufactured by KMZ in the town of Krasnogorsk near Moscow since 1952 and by BelOMO in Belarus since the 1970s. The Zenit trademark is associated with 35 mm SLR cameras. Among related brands are Zorki for 35 mm rangefinder cameras, Moskva (Moscow) and Iskra for medium-format folding cameras and Horizon for panoramic cameras. In the 1960s and 1970s, they were exported by Mashpriborintorg to 74 countries.

The name is sometimes spelled Zenith in English, such as the manuals published by the UK Zenit-importer TOE. However, TOE’s imported camera bodies as from 1963 retained the “Zenit” badges. The early Zorki-based models before that time were labelled “Zenith” in a handwritten style of script.

During 1967 through 1969 KMZ built an automatic die-cast moulding line, allowing mass camera production. Camera production switched to the M42×1 thread (also known as Praktica thread) and an instant-return mirror was also developed. This led to one of the most famous Zenits – Zenit-E which saw (including its subtypes) over 12 million produced. A heavy and tough camera with a mechanism that was of exceedingly simple design along the lines of “what isn’t there, can’t go wrong”. Automatic diaphragm functionality was not available until the introduction of the Zenit-EM, which used a direct mechanism linking the shutter release button to the aperture mechanism, significantly increasing the effort required to release the shutter. Production included both M39×1 and M42×1 mounts for the Zenit E and Zenit B models. Later models were only produced in the M42×1 with the Pentax K mount available for the latest models.

Towards the end of the 20th century, the Zenit-E heritage became an obstacle to the development of more modern Zenit models. This was because almost all low-end Zenits until the recent 412DX have been based on the Zenit-E die-cast chassis, complying with the local philosophy that a crude but affordable camera was better than no camera. The major events of the further development of Zenit-E. Zenit-E was sold also with the Moscow 1980 olympic games symbols.