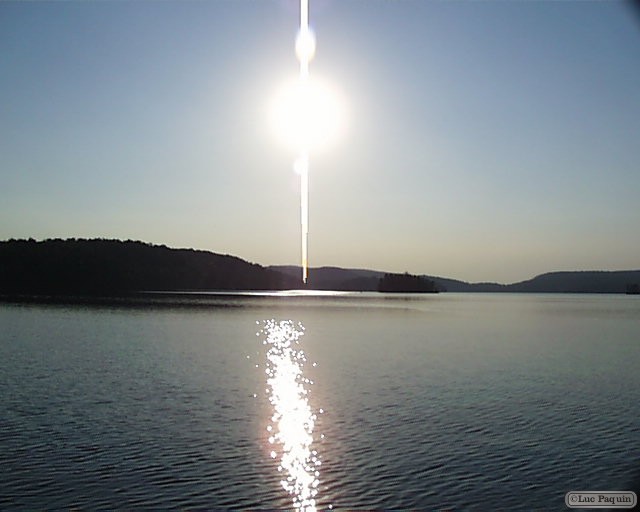 Since 1939, fishes are stocked in our lake. In October 2011, 1,000 lake trouts and 1000 splakes were put into the lake to improve its fisheries health. The splake is a cross between brook trout and lake trout.

Overall, 30% of APEL revenues are allocated to fish stocking.

We remind you that a Lake Trout under 45 cm must be returned to the water and we invite the fishermen of the lake to inform us about their summer catches.

Sunset or sundown, is the daily disappearance of the Sun below the western horizon as a result of Earth’s rotation. 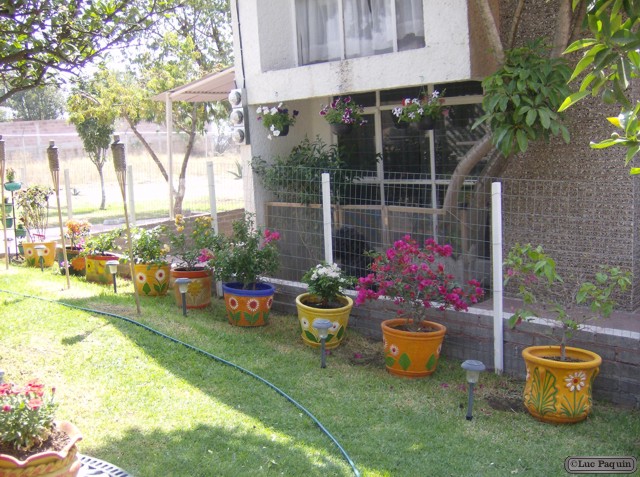 Twenty years after Commerçon’s discovery, it was first published as ‘Buginvillæa’ in Genera Plantarum by A.L. de Jussieu in 1789. The genus was subsequently spelled in several ways until it was finally corrected to ‘Bougainvillea’ in the Index Kewensis in the 1930s. Originally, B. spectabilis and B. glabra were hardly differentiated until the mid-1980s when botanists recognized them to be totally distinct species. In the early 19th century, these two species were the first to be introduced into Europe, and soon, nurseries in France and England did a thriving trade providing specimens to Australia and other faraway countries. Meanwhile, Kew Gardens distributed plants it had propagated to British colonies throughout the world. Soon thereafter, an important event in the history of bougainvillea took place with the discovery of a crimson specimen in Cartagena, Colombia, by Mrs. R.V. Butt. Originally thought to be a distinct species, it was named B. buttiana in her honour. However, it was later discovered to be a natural hybrid of a variety of B. glabra and possibly B. peruviana – a “local pink bougainvillea” from Peru. Natural hybrids were soon found to be common occurrences all over the world. For instance, around the 1930s, when the three species were grown together, many hybrid crosses were created almost spontaneously in East Africa, India, the Canary Islands, Australia, North America, and the Philippines.

Iztaccíhuatl, is a 5,230 m dormant volcanic mountain in Mexico located on the border between the State of Mexico and Puebla. It is the nation’s third highest, after Pico de Orizaba 5,636 m and Popocatépetl 5,426 m.

The name “Iztaccíhuatl” is Nahuatl for “White woman”, reflecting the four individual snow-capped peaks which depict the head, chest, knees and feet of a sleeping female when seen from east or west. 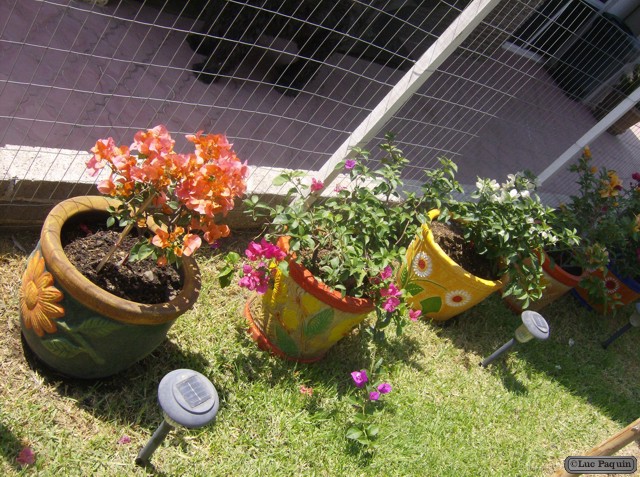 The first European to describe these plants was Philibert Commerçon, a botanist accompanying French Navy admiral and explorer Louis Antoine de Bougainville during his voyage of circumnavigation, and first published for him by Antoine Laurent de Jussieu in 1789. It is possible that the first European to observe these plants was Jeanne Baré, Commerçon’s lover and assistant who was an expert in botany; because she was not allowed on ship as a woman, she disguised herself as a man in order to make the journey (and thus became the first woman to circumnavigate the globe). 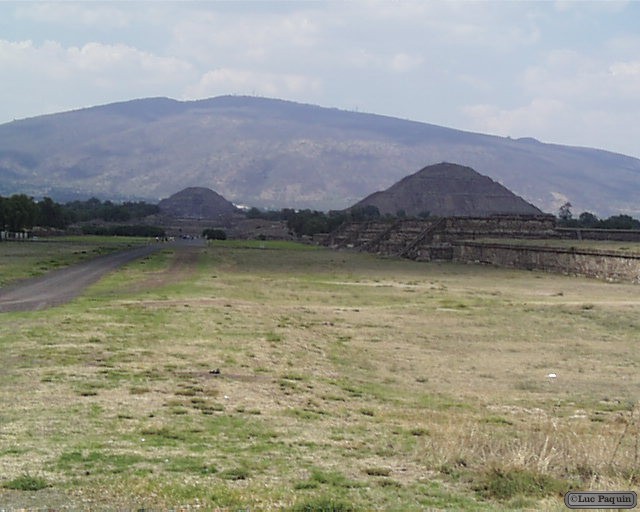 In the Late Formative era, a number of urban centers arose in central Mexico. The most prominent of these appears to have been Cuicuilco, on the southern shore of Lake Texcoco. Scholars have speculated that the eruption of the Xitle volcano may have prompted a mass emigration out of the central valley and into the Teotihuacan valley. These settlers may have founded or accelerated the growth of Teotihuacan. 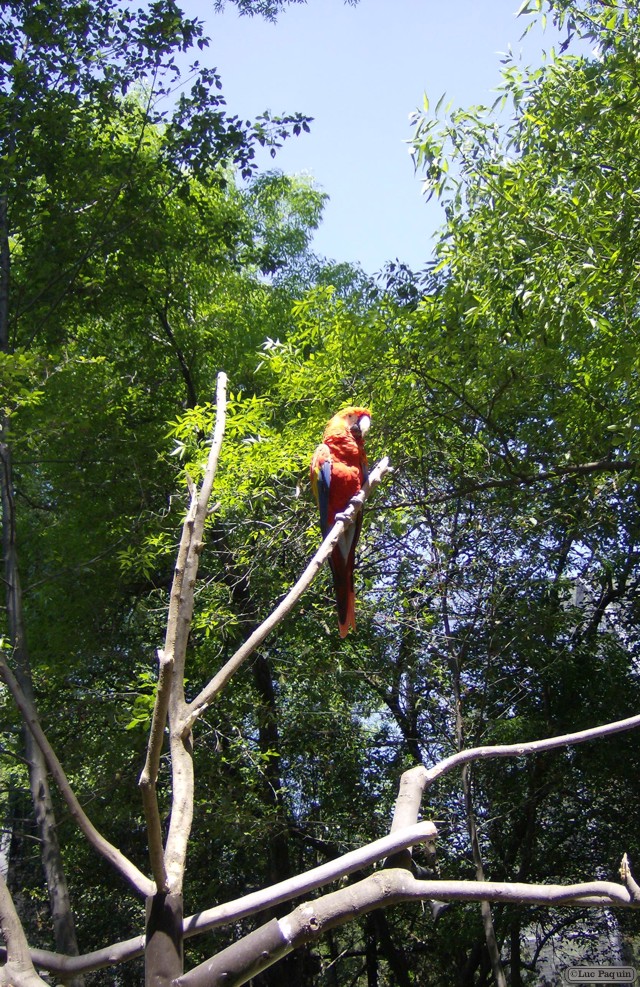 Chapultepec Zoo houses some important native species that are endangered or threatened such as the volcano rabbit, the Mexican wolf, jaguar, thick-billed parrot, ocellated turkey, axolotl and the red-kneed tarantula.

The Chapultepec Zoo is involved with various conservation projects, using both natural and artificial methods. With this purpose in 1998, a reproductive physiology laboratory was established. The collaboration with national and international institutions is part of the work the Chapultepec Zoo does for the benefit of the conservation of wildlife.

Parrots, also known as psittacines, are birds of the roughly 372 species in 86 genera that make up the order Psittaciformes, found in most tropical and subtropical regions. The order is subdivided into three superfamilies: the Psittacoidea (“true” parrots), the Cacatuoidea (cockatoos) and the Strigopoidea (New Zealand parrots). Parrots have a generally pantropical distribution with several species inhabiting temperate regions in the Southern Hemisphere as well. The greatest diversity of parrots is in South America and Australasia.

Characteristic features of parrots include a strong, curved bill, an upright stance, strong legs, and clawed zygodactyl feet. Many parrots are vividly coloured, and some are multi-coloured. Most parrots exhibit little or no sexual dimorphism. They form the most variably sized bird order in terms of length. 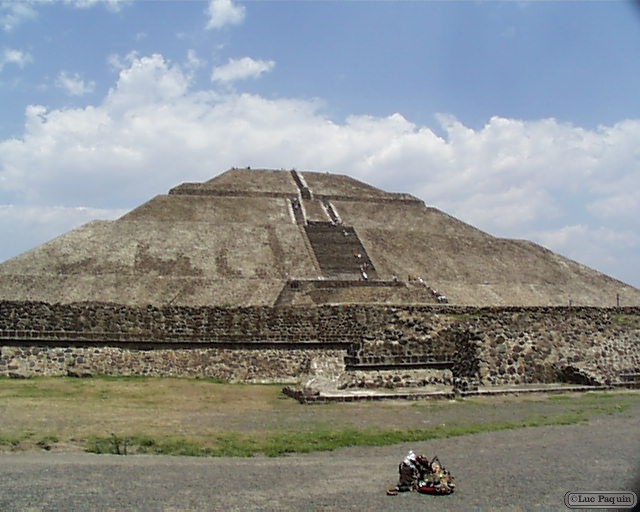 The early history of Teotihuacan is quite mysterious, and the origin of its founders is uncertain. For many years, archaeologists believed it was built by the Toltec. This belief was based on colonial period texts, such as the Florentine Codex, which attributed the site to the Toltecs. However, the Nahuatl word “Toltec” generally means “craftsman of the highest level” and may not always refer to the Toltec civilization centered at Tula, Hidalgo. Since Toltec civilization flourished centuries after Teotihuacan, the people could not have been the city’s founders. 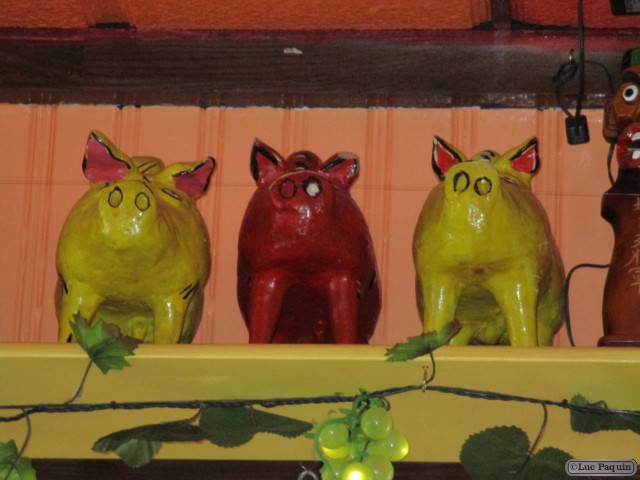 The Besta-wan Big House in Carlsbad

The word “ceramic” comes from the Greek word keramikos, “of pottery” or “for pottery”, from keramos, “potter’s clay, tile, pottery”. The earliest known mention of the root “ceram-” is the Mycenaean Greek ke-ra-me-we, “workers of ceramics”. The word “ceramic” may be used as an adjective to describe a material, product or process, or it may be used as a noun, either singular, or, more commonly, as the plural noun “ceramics”.

A pig is any of the animals in the genus Sus, within the Suidae family of even-toed ungulates. Pigs include the domestic pig and its ancestor, the common Eurasian wild boar (Sus scrofa), along with other species; related creatures outside the genus include the peccary, the babirusa, and the warthog. Pigs, like all suids, are native to the Eurasian and African continents. Juvenile pigs are known as piglets. Pigs are omnivores and are highly social and intelligent animals. 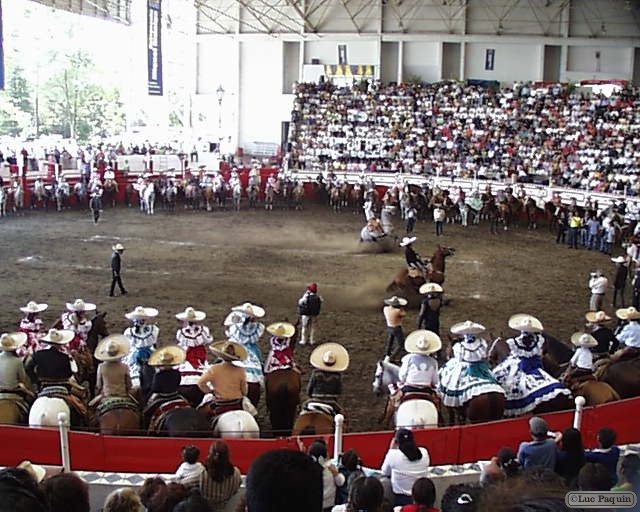 A ‘Charreada’ a colorful Mexican rodeo at the Lienzo Charro here in Mexico City.

The charreada or charrería is a competitive event similar to rodeo and was developed from animal husbandry practices used on the haciendas of old Mexico. The sport has been described as “living history,” or as an art form drawn from the demands of working life.[1] Evolving from the traditions brought from Spain in the 16th century, the first charreadas were ranch work competitions between haciendas. The modern Charreada developed after the Mexican Revolution when charro traditions were disappearing. The competing charros often came from families with a tradition of Charreria, and teams today are often made up from extended families who have been performing for up to five generations. The charreada consists of nine events for men plus one for women, all of which involve horses, cattle or both. Some of the events in the charreada have been criticized by animal advocacy groups and some states have banned certain events. However, there is an absence of independent statistical data and unbiased recording of the injury rate of animals has not been undertaken. 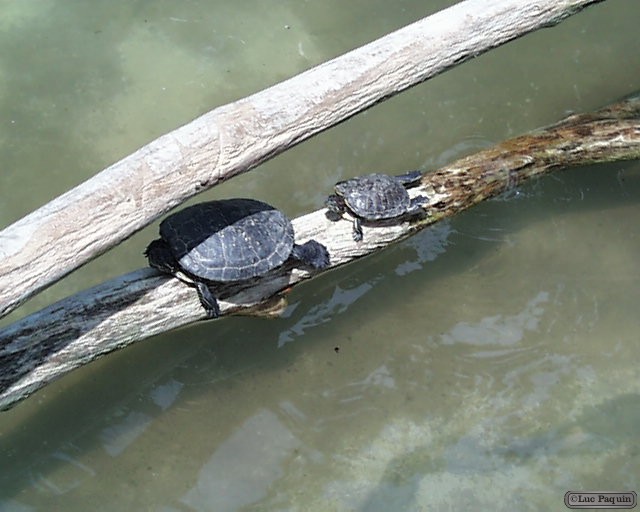 During the period from June 24, 1992 and August 1, 1994, Chapultepec Zoo was completely remodeled through the project “Ecological Rescue Chapultepec Zoo.” A multidisciplinary group including experts in various areas such as designers, engineers, biologists and veterinarians worked in all aspects of the project, seeking to cover the four major objectives of a modern zoo, i.e., recreation, education, research and conservation of wildlife . For over seventy years, the exhibition was classified according to the taxonomic groups: primates, felines, canines, herbivores, birds, reptiles, etc.. The concept has changed to reflect the fact that the animals live together in nature, so now are grouped by bio-climatic zones according to their natural habitat. There are four climates, cold and wet (temperate forest and coastal), cold and dry (grassland), hot and humid (tropical rainforest) hot and dry (arid and savanna). Mexico has all these regions, and at the beginning of each exhibit animals native to the country are exhibited. Exhibits were built trying to recreate a natural habitat for each species, which gives visitors a better understanding of nature and provides the animal enrichment.

Turtles are reptiles of the order Testudines characterised by a special bony or cartilaginous shell developed from their ribs and acting as a shield. “Turtle” may refer to the order as a whole (American English) or to fresh-water and sea-dwelling testudines (British English).

The order Testudines includes both extant (living) and extinct species. The earliest known members of this group date from 157 million years ago, making turtles one of the oldest reptile groups and a more ancient group than snakes or crocodilians. Of the 327 known species alive today, some are highly endangered.

Turtles are ectotherms-their internal temperature varies according to the ambient environment, commonly called cold-blooded. However, because of their high metabolic rate, leatherback sea turtles have a body temperature that is noticeably higher than that of the surrounding water.

Turtles are classified as amniotes, along with other reptiles, birds, and mammals. Like other amniotes, turtles breathe air and do not lay eggs underwater, although many species live in or around water.