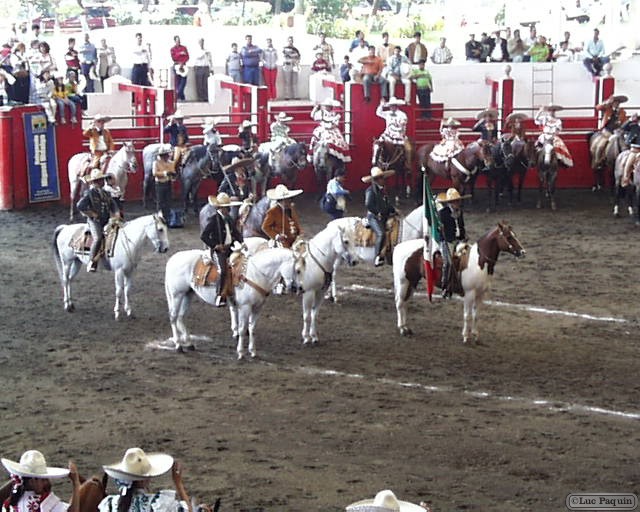 A ‘Charreada’ a colorful Mexican rodeo at the Lienzo Charro here in Mexico City.

A lienzo charro is an arena where charros hold the events of charreada, torneo de colas and bull riding.

A lienzo has two areas: one 60 by 12 metres and a second, circular area 40 metres in diameter. Charreada is a team competition in which teams go head-to-head to win points in different competitions. The team with the most points at the end wins. The torneo de colas, also known as the coleadero, is a multi- or single-competitor event in which a mounted charro throws a bull to the ground by catching its tail, wrapping it under his leg, and making a turn. The lienzo charro may be enclosed to accommodate bull-riding competitions.

Snow is precipitation in the form of flakes of crystalline water ice that falls from clouds. Since snow is composed of small ice particles, it is a granular material. It has an open and therefore soft, white, and fluffy structure, unless subjected to external pressure. Snowflakes come in a variety of sizes and shapes. Types that fall in the form of a ball due to melting and refreezing, rather than a flake, are known as hail, ice pellets or snow grains. The process of precipitating snow is called snowfall.

The city is thought to have been established around 100 BC, with major monuments continuously under construction until about AD 250. The city may have lasted until sometime between the 7th and 8th centuries AD, but its major monuments were sacked and systematically burned around 550 AD. At its zenith, perhaps in the first half of the 1st millennium AD, Teotihuacan was the largest city in the pre-Columbian Americas, with a population estimated at 125,000 or more, making it at minimum the sixth largest city in the world during its epoch. Teotihuacan began as a new religious center in the Mexican Highland around the first century AD. This city came to be the largest and most populated center in the New World. Teotihuacan was even home to multi-floor apartment compounds built to accommodate this large population. The term Teotihuacan (or Teotihuacano) is also used for the whole civilization and cultural complex associated with the site.

Although it is a subject of debate whether Teotihuacan was the center of a state empire, its influence throughout Mesoamerica is well documented; evidence of Teotihuacano presence can be seen at numerous sites in Veracruz and the Maya region. The Aztecs may have been influenced by this city. The ethnicity of the inhabitants of Teotihuacan is also a subject of debate. Possible candidates are the Nahua, Otomi, or Totonac ethnic groups. Scholars have also suggested that Teotihuacan was a multiethnic state. 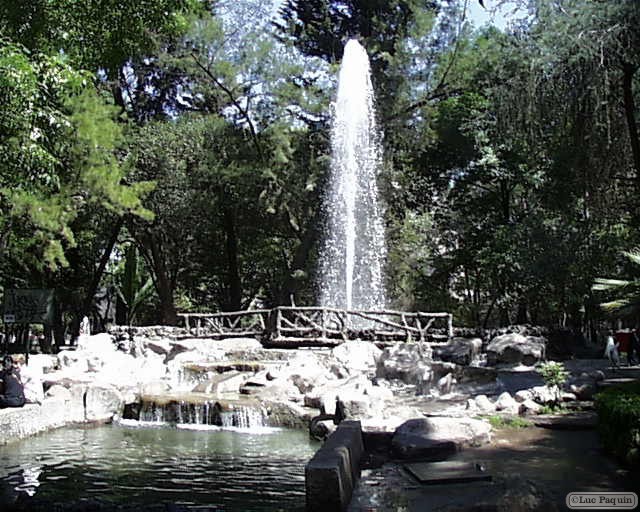 The Parque México, also known as the Parque San Martín, is a large urban park located in Colonia Hipódromo in the Condesa area of Mexico City. It is recognized by its Art Deco architecture and decor as well as being one of the larger green areas in the city. The park was built in the 1920s, when its surrounding neighborhood of Colonia Hipódromo was being established. It is the former site of a horse race track on an hacienda that belonged to the Countess of Miravalle. When this part of the hacienda was being partitioned and redeveloped into a housing area, environmental laws at the time did not permit housing on the former track. Instead it was turned into the current park. Today, Parque México is not only the center of Colonia Hipódromo, it is also the center of the entire La Condesa section of the city. 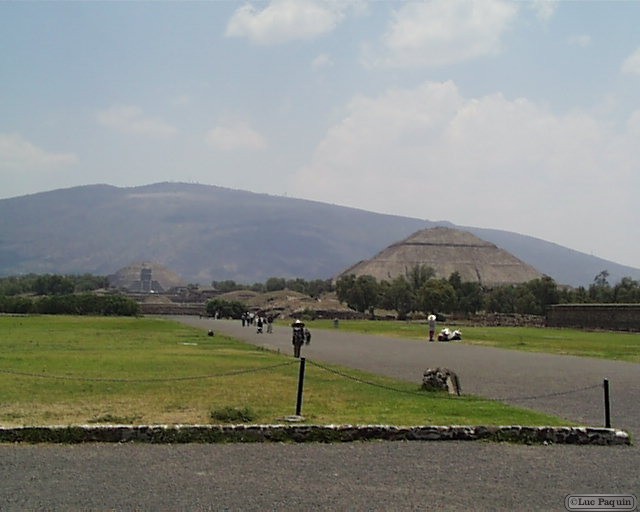 Teotihuacan, also written Teotihuacán, was a pre-Columbian Mesoamerican city located in a sub valley of the Valley of Mexico, located in the State of Mexico 30 miles northeast of modern-day Mexico City, known today as the site of many of the most architecturally significant Mesoamerican pyramids built in the pre-Columbian Americas. Apart from the pyramids, Teotihuacan is also anthropologically significant for its complex, multi-family residential compounds; the Avenue of the Dead; and the small portion of its vibrant murals that have been exceptionally well-preserved. Additionally, Teotihuacan exported a so-called “Thin Orange” pottery style and fine obsidian tools that garnered high prestige and widespread utilization throughout Mesoamerica. 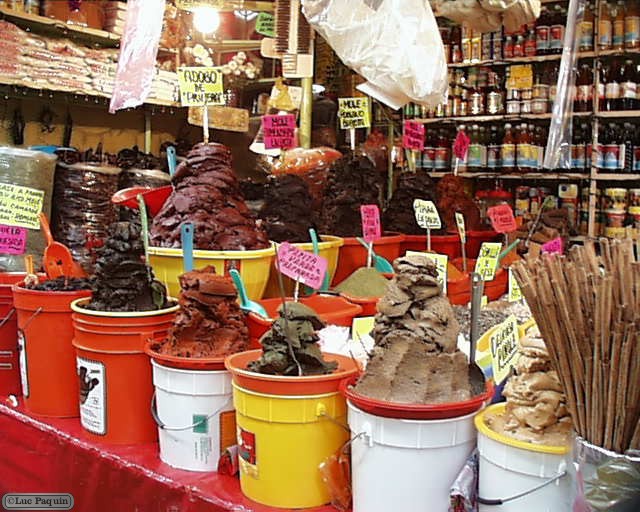 Mercado Jamaica is one of Mexico City’s traditional public markets where various vendors sell their wares in an established location. This market was inaugurated in the 1950s as part of efforts to modernize the markets in the area. The market is located on the corner of Congreso de la Union and Avenida Morelos, just southeast of the historic center of the city. Although it is one of the main markets for groceries, produce and meat, it is best known for its flowers and ornamental plants. There are 1,150 stands dedicated to the selling of cut flowers, flower arrangements, ornamental plants and accessories such as flowerpots. The market offers about 5,000 types of flowers and plants, mostly foreign, but there is a number of native Mexican species available, including some gathered directly from the wild.

All mole preparations begin with one or more types of chili pepper. The classic moles of central Mexico and Oaxaca, such as mole poblano and mole negro, include two or more of the following types: ancho, pasilla, mulato and chipotle. Other ingredients can include black pepper, achiote, guaje, cumin, cloves, anise, tomatoes, tomatillos, garlic, sesame seeds, dried fruit, hoja santa and many others. Mole poblano has an average of 20 ingredients; mole almendrado has an average of 26, and Oaxacan moles can have over 30. Chocolate, if used, is added at the end of cooking. The ingredients of mole can be grouped into five distinct classes: chiles, sour (tomatillos), sweet (dried fruits and sugar), spices, and thickeners (nuts and tortillas). 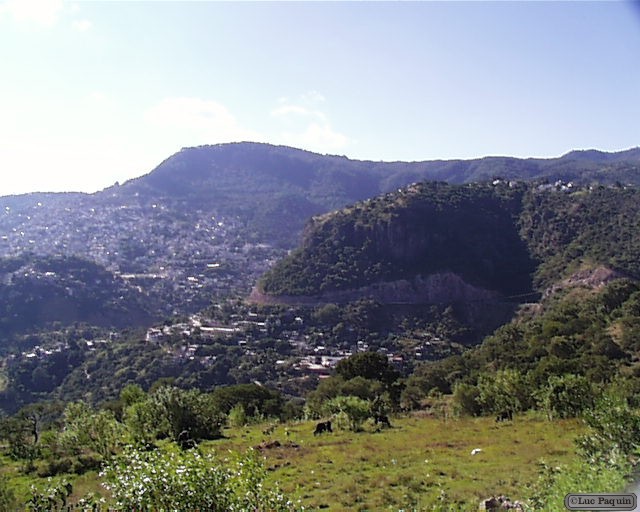 The climate ranges from hot and relatively moist in the flatlands to warm and relatively moist in the higher mountainous areas. Average temperatures for the year range between 18 and 20 C. Most of the municipality is covered in semi-tropical foliage which has a tendency to drop leaves during the dry season from October to May. In the highest elevations, pine and oak forests can be found.

The city of Taxco de Alarcón is the seat and the governing authority for 141 other communities, the largest of which are Tlamacazapa, Acamixtla, Acuitlalpan, Atzala and Taxco el Viejo. The total population of the municipality is 98,854, and the territory measures 347km2. Less than 3% of the population of the municipality is of pure indigenous ethnicity according to the Census. The two indigenous languages spoken here are Nahuatl and Zapotec. It borders with the municipalities of Tetipac, Iguala, Teloloapan, Buena Vista de Cuellar, Pedro Ascencio Alquisiras and Ixcateopan as well at the state of Puebla.

The terrain has an average altitude of 1,752 meters, which ranges from 1,000 meters to 2,300 meters. Seventy five percent of its territory consists of rugged mountains, twenty percent is semi-flat and only five percent is flat. The flatter lands are in the lower elevations. The major rivers here are the Taxco and the Temixco, with a number of arroyos that feed into them during the rainy season. There is a lake that is filled only part of the year and a small dam called San Marcos.

Most of the municipality’s natural resources lie underground in the form of gold, silver, lead, copper, and zinc deposits. Above ground a number of species of timber trees exist as well as areas for agriculture and livestock. Principle crops grown in the municipality are corn, peanuts, luffa sponges, beans and tomatillos. Livestock consists of pigs, goats, horses and some fowl. Most of the industry here revolves around mining precious metals as well as the manufacture of drywall and masonry materials.

Brébeuf is a parish municipality in the Laurentides region of Quebec, Canada, part of Les Laurentides Regional County Municipality. It is located along the Rouge River (Rivière Rouge), near Mont-Tremblant.

Dairy cattle (also called dairy cows or milk cows) are cattle cows bred for the ability to produce large quantities of milk, from which dairy products are made. Dairy cows generally are of the species Bos taurus.

Historically, there was little distinction between dairy cattle and beef cattle, with the same stock often being used for both meat and milk production. Today, the bovine industry is more specialized and most dairy cattle have been bred to produce large volumes of milk.